FLY OR DRIVE - ALL-ELECTRIC VEHICLES IN THE 21ST CENTURY

Article
New!
February 5, 2021
FLY OR DRIVE - ALL-ELECTRIC VEHICLES IN THE 21ST CENTURY
All Electric Vehicles (EVs)
American automobile manufacturers have been getting into the EV market with hybrids and all-electric cars for some time now. General Motors (GM) was the first to announce a major focus on EVs, promising 30 new electric models to be launched through 2025. Cadillac, GMC, Chevrolet, and Buick will all be represented with EVs. GM's Ultrium battery first used in the 2017 Chevy Bolt is in second generation development and promises lower cost and more energy.
eVTOL Aircraft
Kitty Hawk, a company based in Palo Alto, California, has been developing prototypes of flying vehicles that can take off and land vertically, like a helicopter. One prototype, dubbed the Heaviside, (after Oliver Heaviside, an English electrical engineer of the 19th century) is known as an eVTOL (Electric Vertical and Takeoff Landing) vehicle. Propelled by 8, tilting, variable pitch propellers, it has been shown to have a range of up to 100 miles, speeds of up to 180 mph, and can take off 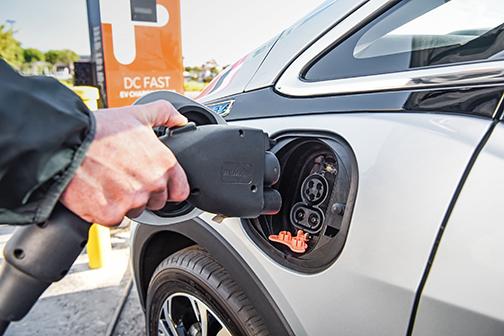 and land within a 900-foot square space. Kitty Hawk says its vision is to free the world from traffic and to bring the ease of flying drones to the world of air transportation.
Drive and Fly
AeroMobil, a European company has developed an eVTOL that can fly and be driven on the ground. Audi and Airbus are collaborating on an electric flying/driving vehicle as well. Volocopter in Germany is working on an eVTOL aircraft taxi service. Porsche and Boeing are also collaborating on an eVTOL flying taxi vehicle. Terrafugia, in Woburn, Massachusetts is working on a hybrid car that can transform into a plane - it can be driven or flown. Uber began working on self-driving and flying cars, but Joby Aviation, an eVTOL flying car startup, bought out Uber Technologies. Joby intends to start offering a flying taxi service as soon as 2023.
The Future
These partnerships and collaborations are only a few of the projects looking to the future of EVs and eVTOLs. The technology is being perfected and the next decade may contain all kinds of vehicles that are unknown today. What remains to be known is the price of these vehicles, and how likely it is that the average consumer will be able to own one. And of course, there must be laws and regulations in place to safely implement these technologies. Current regulations in most cities prohibit low flying aircraft. Maybe office workers in 2030, on the upper floors of skyscrapers, will be looking out onto flying taxis, driven by the likes of Bruce Willis (The Fifth Element, 1997) or perhaps the air space will be filled with Jetson-like vehicles, buzzing and zipping around buildings.
What we do know is that these vehicles will need to be kept clean! SpeedWash Car Wash plans to be here for many years to come, innovatively adapting to new technologies, so your vehicle can be kept in tip top shape!
previous page